It was cloudy and overcast this morning, made me think of winter with the cold chill on the air cutting through my skin, and make me want a hot cuppa tea and a bowl of soup. The park had this unusual feel about it, it was quite magickal. I could feel energies, spirits, moving between the trees, watching us humans as we walked through their inner city forest. I could feel Herne walking with me, walking over the ivy that lined the floor between the trees, as I shared the path with joggers.

I was heading over to my spot on the grass at the southern end of the park to do my morning ritual. As I’ve been walking straight up to work from Central, I haven’t been able to do it for a while. That’s when I found my tree. I was lead to my tree. There’s a belief with the Aboriginals that we each have a soul tree, one tree to which our souls are completely aligned to, and that’s where we go for rest when we pass over. I’ve lost count as to how many times I had walked past this young tree, but as I walked under its canopy of leaves this morning, I had to stop myself from bursting into tears. I cannot express how at home I felt, and had the ground not been wet, I would’ve sat down. It was overwhelming, and I couldn’t move forward. The feeling completely stopped me in my tracks, and I couldn’t ignore it. I just stood there, looking at the tree, about to cry, soaking it all in. My tree. My hands began to tingle, began to pulse. So I walked to the trunk and placed my hands upon it, and the pulsating and throbbing grew. And I knew it was my tree. 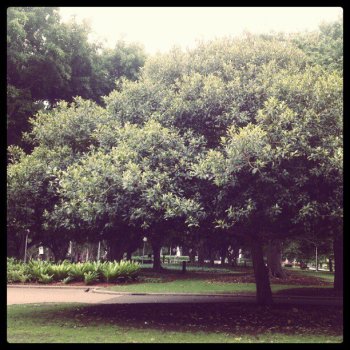 I don’t know how long I stood there, trying to hold onto my emotions. I had to go, obviously, I had to get to work. But as I looked at the ground watching a seagull which had joined me, I recognised a leaf. The tree next to it was a young Oak. On this small patch of grass next to the Reflecting Pool of the Anzac Memorial, there are only two trees. The fig tree, and the oak tree. My tree, and Herne’s tree. I began to cry again, told myself to harden up, and smiled as I saw the magpie fly into perch itself on the branches of the oak, pruning itself.

Magpies represent home and protection. To me, seeing the magpie sitting in the oak, it was like a joining of my home land with my ancestral homeland.

We Druids have a “thing” with ancestors, and I’ve noticed that Australians in general have a “thing” with ancestral land. I may not have Aboriginal blood in me, but this is my home, for I know no other. Depending on what side of the family you look at, I range from 2nd to 8th Generation Australian. This is my home, this is the land to where my ancestors came, chose or forced (ahh the Convict blood!) In this sense, this is my ancestral home. A town in Victoria, in particular, can be seen as my Ancestral home, for there are at least five or six generations there.

Britain, Albion, is also my ancestral land. That is where the majority of my ancestors come from (along with Ireland, Wales, and the Netherlands) but it’s to Britain that I feel the most connected to. The stories of King Arthur and his Knights, of Robin Hood and Sherwood forest, they were my first introduction to British myths.

Now as I study the history and mythology of my homeland, of the serpent who created the hills and valleys, who carved the rivers, I’m blending the two in my path and celebration of what Druidry is to me.