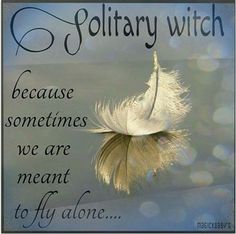 I’ve never really tried to find a coven. I’m one of those people who feel awkward when first meeting anyone, and unless we really hit it off, I’ll still feel awkward and uncomfortable around you. I don’t mean to be like that, but it just kinda happens. It doesn’t matter what situation it’s in – Pagan meet ups or work functions, even family get togethers. I’m an awkward sort of person when I feel uncomfortable.

I’ve worked closely with fellow Pagans. I’ve gone to events, public rituals and have performed a few with close friends over the years. Those are special. With those I enjoy sometimes taking the back seat, especially if a ritual is based on their tradition and not mine. I’ve found myself recently putting my hand up in groups to say, “I’ll call that Quarter!” because it lends itself to the experience and I’m slowly gaining experience in group situations.

Those intimate group weekends are so magickal, and amazing, and the energy that we create is real and senses are heightened. In small group settings we’re able to bring all of our traditions together, pick out the best bits, and create something beautiful and unique.

When I first became interested in this path, I was 14, it was 1998 and the internet was somewhat new. Internet searches on Witchcraft said I MUST find a Coven, and that it could ONLY be Alexandrian or Gardnerian, and if you didn’t join a coven that wasn’t either of those, then you couldn’t be a real Witch. It said that you couldn’t be a solitary because it was wrong to learn purely from books, and that it wasn’t real because you weren’t learning from first-hand knowledge.

Personally, that’s a whole load of crap that I know a lot of people will agree with me on. And sadly, it’s a trend that I see over and over again.

When I first really began, I bought “The Witches of Oz” but I couldn’t get into it because it was Coven based. Then I borrowed Scott Cunningham’s Wicca for the Solitary Witch off a friend I worked with, who couldn’t believe I hadn’t heard of that book. This was a fantastic starting point for me, as from there I grew and developed. One book that I will recommend to anyone for the basics but doesn’t want something completely Wiccan, is Shanddaramon’s “Self-Initiation for the Solitary Witch” and later “Living Paganism.” Those books were like my Bible in the first few years. I used them as text books, I read them over and over, I copied and highlighted and until I developed a sense of self, that was what I turned to, and what I still turn to on the odd occasion. And then, as we tend to do in the beginning (and I was single, on good money and it was burning through my pockets) I bought book after book after book. Not all I agreed with, not all suited me and felt comfortable with, but it was so wonderful to read and learn from a different point of view.

What really helped me in the beginning was attending a Witchcraft Intensive weekend that Wendy Rule hosted at her home. She helped cement things in my mind, answered a lot of questions, and that was the day that I really knew that I was on the right path.

Looking for a coven didn’t interest me because of how I am and how my personality is. I’m someone who can either take things too literally, or misinterpret what’s written or said, which I do A LOT! Just ask my Muggle! I can become fanatical for a few weeks then leave it be and become disinterested quite easily. I’m also incredibly stubborn, a typical Leo, and fall under “The Leader” in Jung psychology, even though I never want to be the one in charge. I have issues with needing to be in control and organising, because I never felt in control growing up (thanks mental instability and depression!) but I don’t want to be the one leading the group.

If I don’t feel comfortable with something, I won’t do it. Simple as that. Unless you can convince me why it’s in my best interests to do something, I’m not budging. If you want me to do a certain part within a ritual and I’m uncomfortable with it, whether it’s a bad day or my confidence isn’t there because of what it entails, there is no way I’ll be helpful.

So group work is great for me, but only in certain situations. I’ve also been in groups, not necessarily Pagan groups (uni, work, other) where there are so many ego’s flying around it gives me a headache. When so many people are convinced that their way is the right way, regardless to if it is for the group, I will want to flee. Many of us do – we don’t need to be around that kind of energy!

On the Pagan perspective, given my path, it’s too hard to find a group where I will be comfortable in. My practice is so eclectic, I feel comfortable on my own, doing my own thing, in my own time. No need to worry about Pagan Standard Time (or “an excuse to be late because of x, y, z reason”) I can call upon my Gods, I can burn my resin, and I dance to the beat of my own drum. I make things up on the spot, I go with the flow, and I will never read from a piece of paper during ritual. Or by the light of a mobile phone.

I’ve also been a part of spiritual groups where they… it’s not overly FORCING their belief and way of thinking onto you, but mind tricks and persuasion, and degradation became common practice – all with a smile on their face! I’ve been told that, after this person had known me for years, “unless you accept Jesus and Heaven into your life you will never be happy.” I never returned to that group after that. And when people who are new are trying to give you “sage advice” about your practice, just don’t. Don’t pretend you’re a High Priestess when you’ve been practicing for five minutes and feel as though you have the right to tell my friends and I “to be careful, because you don’t know what type of energy you’re playing with.” Over thirty years of experience between my friend and I that day. We laughed and left her store.

For those two examples (among others I won’t share) is why I will always shy away from coven work. Egos. Superiority complex. Bah!

If it is a learning circle, or a learning group, and I am going there to learn – I will sit down, shut up, and devour every bit of information given. I will hang onto your words, I will let it all sink in, and I will try my hardest when it comes to group participation. I will learn, I will grow, and I will thank you for being the teacher.

Unless we’re all on the same page, I’m very happy being a solitary.