While my mind is clear I feel the need to write. I’m not used to this type of depression, so having a day where I feel normal is quite a relief and one that I hope stays for a while.

Although I’ve had depression to varying degrees for as long as I can remember, this is the first time I’ve experienced it without the desire to cut, to eat, to drink heavily, and certainly the first where I’m not suicidal.

PMS on the other hand, gives me that feeling every month without fail. Hormones.

In my last post I asked a question of what do you do to cope, and I’m still trying to find an answer. So far what has worked is sleep, lots and lots of sleep, Saturday morning to myself to fluff about (while my muggle worked) and bit by bit, step by step, knocking down the cliff that I seem to be looking down from.

I’m terrified of heights. Rides I’m fine with; cliffs, edges and stools not so much.

So what’s been getting me down?

Work, for the main part. Trying to wrap up one project (I have until the end of this month there after being there since we won the contract in 2011) and starting at the other, spending the first part of my week in the city while the other is spent in Sydney’s “Bible Belt”. The job is great, and it’s another two years of work, but it’s so different to Surry Hills. Not to mention for a while I was trying to work out of an office block a 20 minute drive away from site, which was delaying getting anything done promptly.

And study. My friend and I haven’t had a real break from finishing our exams for Quanitative Thinking (Statistical Mathematics – I passed by the skin of my teeth!) to our two new subjects starting. Biodiversity (Biology) is soooooo much reading which I can’t do on the train because the book is massive and awkward, and Environmental Planning & Climate Change which I’ve barely looked at because I’ve been exhausted from work.

But as I keep being told in the back of my mind, just do things bit by bit. Slowly chip away at what you need to do, understand that some things are constant (like the influx of invoices, engineer requisitions and washing dishes) and some things are simply out of my control.

Control. I love control. It’s why I was a cutter for ten years – because when my depression was undiagnosed, cutting became something I could control. And yet I could never be a Dominatrix…hmmm…random thought.

I have a new laptop as the other died after being faithful for six years. This makes the online element of university easier to cope with. I have my routine where I talk to Herne and give him honour on a set night each week, more often if I feel the need to. We’re becoming closer, and we’re finding ways to communicate even with me being blocked through the depression. I love our chats – it’s like skyping with each other sometimes!

The thing I need to remember and constantly remind myself through this is…I’m not alone. I have Herne, I have my muggle, and I have my friends. Those who’ve been through this can understand where I’m coming from – depression plays tricks on your mind and makes you feel alone. You could be in a crowd of people, and you could still feel like there is no one there to help you. (Actually, as a fat girl, this has happened. I’m known to fall and slip, in crowds, and people just walk on by. I’m fat, not diseased!!) Through the depression, you also push everyone away so they don’t get caught up in your grey cloud. Maybe some don’t, but I’ve always pushed people away. I’ve lost many friends during my Days of Darkness thanks to this.

My guides have made it known that I am not alone, by scaring a dear friend of mine this morning by appearing in her lounge room. I’ve got the new computer to start on Biodiversity, and one day I’ll remember to bring home the flippen print outs so I can start on my Environmental Planning essay. Instead of throwing myself into work to escape the tricks my brain is playing on me, I need to throw myself into my study. I need to refocus my energies, refocus my mind, for at least two more weeks. 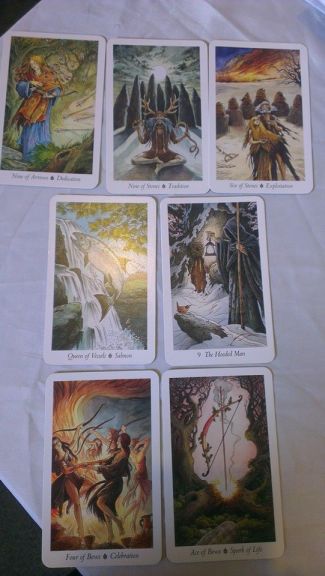 I’m going to Canberra for Mabon in a fortnight. Excited!!

These are the cards I drew yesterday, and they’re telling me as it is. The first row’s overall meaning gives me study, suggestions for study, and throw yourself into study. The second gives me a message from my guides and from Herne, and the third row mentions Canberra and feeling rejuvenated after Canberra.

This depression won’t last long, and I think with a few more decent nights sleep I’ll be better. I’m not getting into my second job at 5.45am anymore. We’re on site, there’s on-site parking and no one is expected to start before 6.45am. Yay sleep in! I don’t have to leave home until 6 and this has been making such a difference over the last two days there.

I can get through this. I’ve certainly gone through worse. But I’ve never been in THIS situation before. It’s new. It’s like one of the Doctor’s regenerations where everything is new – new feelings, emotions, teeth, hair (still not ginger). Like a lot of people, I don’t handle change very well. I should, I’ve moved houses enough times to understand that change happens and change is good.

It’s overwhelming. And there’s a whole other reason for why I’ve been down which those close to me will know about and for obvious reasons will not be posting here.

I’ll be fine. I’ll get there. I always land on my feet in the end, it’s just the journey down from the ledge that scares the shit out of me.