I just want to explain that by “sick” I mean I have a wussy version of the flu. My glands are swollen, my throat is raw from coughing, I’m congested, and to top it all off I have a tooth ache. And now I’m done with the self pity!

I’m not sure where my head has been of late, and I’m thanking the cold for this. My thoughts have been all over the shop, and yesterday at work I got a headache from four hours of filing. Yes, it can be done.

A beautiful piece of honey calcite arrived for me yesterday in the mail and its energies are amazing! While spending most of today in bed (where It’s warm) I’ve been meditating and connecting with it. Even sick, I felt ny third eye open. I need to make sure now what is a message and what is a hallucination because I’ve been having a few of those of late when feverish. 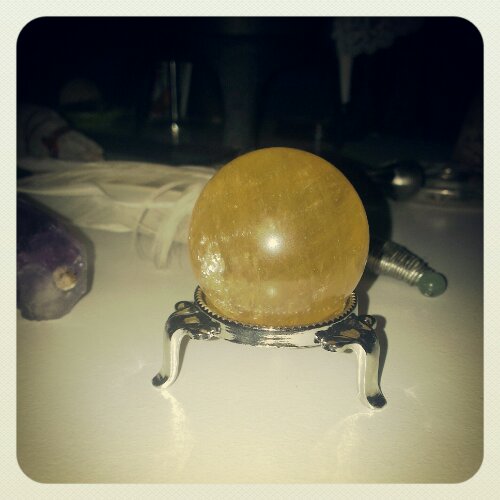 I just wanted to get a few things out in the open so I can work through them later when mentally with it.

I have a feeling we’re going to move again this year. If we do, it’ll be our eleventh move on seven years. It’s north of where we are, but I don’t think it will be further than Newcastle.

At the moment *deep breath* we’re having problems falling pregnant. My body’s fault. Woah, that’s a first in announcing that. But I’m seeing a doctor and we’re doing something about it. Due to this, I don’t think pregnancy will come until after we move again. I don’t think I’m ready to go into further detail about what i have, but I’m fairly certain my body is not meant to have children in this lifetime.

But thanks to modern science, this clucky Pagan is having kids! After we move again. And I know what it’ll be. I’ve known for over a year now.