I feel like I’ve been a bad lil Pagan of late because I haven’t done much. I haven’t done anything for Mabon or for the Sydney equivalent, I haven’t given a daily offering or had a proper yarn with Herne in way too long. I haven’t felt the desire to blog of late as my head has been filed with other bits and I don’t like writing when I’m stressed.

I was going to ask the questions, “have you ever ‘sucked up’ to the Gods” and “have you ever felt as though you needed to?” but then I realised it was my Catholic upbringing and the belief I need to repent my sins in order to be forgiven peering its head. Herne’s laughing in my ear, now.

I’m still going to ask it – those of you who are Dedicants of the Gods, do you ever get the guilts when life gets in the way and you get side tracked from daily offerings and silent moments between yourself and your beloved/Devoted/Patron/Matron?

I always blame my mother, because she in turn blames the Nuns (so in a way I am too), but I have a very deep routed sense of guilt. I feel guilty for leaving work early or for taking a legitimate sick day, for not attending a uni tutorial, or cancelling on friends when I’m unwell. I know that Herne “gets it” but I still don’t like it within myself because I should have more self discipline (to multiple aspects of life, I’m being told). 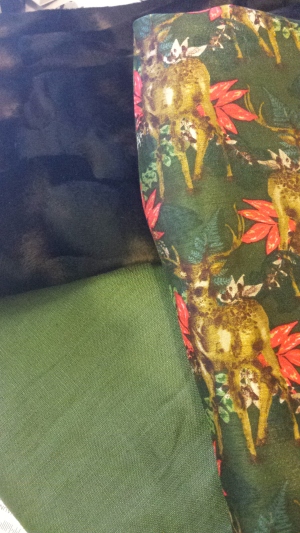 This is where I love my intuition as it really pushed me today as I haven’t had a chance to act on it for a few days. To make up for it, Herne wanted his altar changed.

After five years of the same altar cloths, it’s time to spruce up his altar to the way he wants it.

The image really doesn’t the three justice. And how gorgeous is the deer print?! Green canvas, a brown animal-like faux something and a gorgeous deer print on silk – I could not believe my luck! Thank-you Spotlight!

The altar is definitely looking a lot more manly now. The Green Man altar cloth has been retired, his shrine has had a good dust and it’s very “him” as opposed to, “well I’ve got this bit of material, I guess that will do” as is known to happen when you’re not entirely sure what you want, but you want something.

I’m missing one piece from the altar being completely finished in this incarnation, which I should have tomorrow.

Have you ever found that re-doing your altar brings a new energy about?

One thought on “Altar Freshen Up”